Bradley Cooper Gets 'Burnt' on Blu-ray

John Wells' dramedy co-starring Sienna Miller and Uma Thurman will be served on Blu-ray in January.

In an early announcement to retailers, Image Entertainment is working on 'Burnt' for Blu-ray on January 26.

Chef Adam Jones (Bradley Cooper) had it all – and lost it. The former enfant terrible of the Paris restaurant scene had earned two Michelin stars and only ever cared about the thrill of creating explosions of taste. To land his own kitchen and that third elusive star though, Jones will need to leave his bad habits behind and get the best of the best on his side, including the beautiful Helene (Sienna Miller). BURNT is a remarkably funny and emotional story about the love of food, the love between two people, and the power of second chances.

Specs have yet to be revealed, but supplements include: Burnt: In the Kitchen with Bradley Cooper; Deleted Scenes; Q&A highlights with the Director and cast; and Feature Commentary with Director John Wells and Executive Chef Consultant Marcus Wareing.

You can find the latest specs for 'Burnt' linked from our Blu-ray Release Schedule, where it is indexed under January 26. 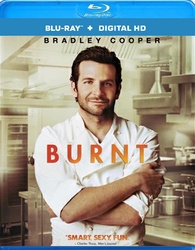