The horror sequel will be a Best Buy exclusive in July with a retailer wide release this September.

In an early announcement to retailers, Image Entertainment is preparing 'The Town That Dreaded Sundown (2014)' for Blu-ray on September 8, however the release will be available earlier only at Best Buy on July 7.

Based on a terrifying true story, The Town That Dreaded Sundown picks up 65 years after a masked serial killer terrorized the small town of Texarkana, when the brutal "Moonlight Murders" suddenly begin again. While on a trip to Lovers' Lane, 17-year-old Jami (Addison Timlin) watches as her date is brutally slain by a masked serial killer. Barely escaping with her life, Jami becomes obsessed with finding the killer referred to as "The Phantom." As the body count mounts and the carnage comes closer, Jami delves deeper into the mystery with the help of the town archivist Nick (Travis Tope), following clues that point her toward the killer's true identity.

You can find the latest specs for 'The Town That Dreaded Sundown (2014)' linked from our Blu-ray Release Schedule, where it is indexed under September 8. 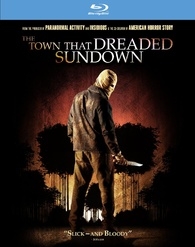