The 1991 film will be getting the Blu-ray treatment this summer.

As previously reported, Image Entertainment will be releasing 'The Commitments' on Blu-ray on August 30.

Landmark musical comedy from acclaimed director Alan Parker (Angel Heart, Midnight Express). Fueled by raw talent and driven by dreams of glory, a dozen dead-enders from Dublin's gritty North Side share a passion for soul music that takes their band on a wild roller-coaster ride from the streets to the stage... to superstardom!

Specs have yet to be revealed, but supplements include: 25 Years Later: New interview with Alan Parker and cast; Audio Commentary with Alan Parker; Four Behind-the-Scenes featurettes; Music Video; Image Galleries; and Collectible Booklet.

You can find the latest specs for 'The Commitments' linked from our Blu-ray Release Schedule, where it is indexed under August 30. 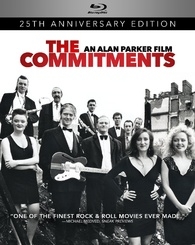