'Every Thing Will Be Fine' on Blu-ray in June

In an early announcement to retailers, IFC Films is preparing 'Every Thing Will Be Fine' for Blu-ray on June 7.

This searing drama charts the emotional odyssey of a struggling novelist whose life is turned upside down one wintry night following a fatal car accident. The incident sets him on a soul-searching, decades-long journey toward redemption, a quest that profoundly touches the lives of both his girlfriend and the accident victim's mother.

You can find the latest specs for 'Every Thing Will Be Fine' linked from our Blu-ray Release Schedule, where it's indexed under June 7. 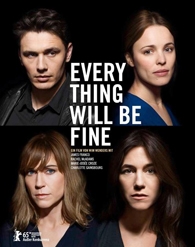 Discs mentioned in this article: (Click for specs and reviews)
Every Thing Will Be Fine (Blu-ray)