'The Ninth Configuration' Bound for Blu-ray

In an early announcement to retailers, Hen's Tooth will be releasing 'The Ninth Configuration' on Blu-ray on November 4.

In an experimental government center for troubled Vietnam veterans, the inmates run the asylum. One works on an adaptation of Shakespeare... for dogs. Another fancies himself a caped superhero. Still others masquerade as frogmen, nurses, nuns, pirates, doctors. Yet the psychiatrist in charge eyes all with a stoic reserve. Maybe too stoic: there's a mystery here. And its final resolution is like a thunderclap.

Specs haven't been revealed yet, but supplements include: Audio Commentary by William Peter Blatty; Deleted scenes and outtakes; and a Featurette.

You can find the latest specs for 'The Ninth Configuration' linked from our Blu-ray Release Schedule, where it is indexed under November 4. 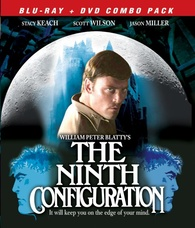