Offer may not last.

Note: This deal is appears valid, but may be a mistake.

Right now, 'Dead Space' for the PC is listed as 100% off of its normal $19.99 price on the Origin store. The free offer is stated as being good until May 8th. Here's the link. Mistake or real deal- get it while it's available. Many fans really cherished the first 'Dead Space.' 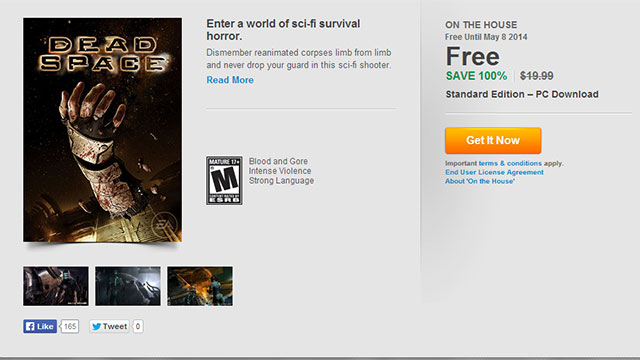 Though it's nearly six years old, 'Dead Space' is one of the few games that managed to allow the player the (necessary) ability to fight back while still keeping up the horror and tension of a survival horror title. The game takes place on the USG IShimura, a kind of mining ship, full of industrial style corridors and rooms, each packed full of horror spewing vents. The affliction that has spread from the relic/nearby planet has turned the ship into gallery of horrors, each one trying to make sure that the player and any surviving and sane NPCs die a horrible death.