The HBO series starring Bobby Cannavale is coming to Blu-ray in June.

In an early announcement to retailers, HBO is preparing 'Vinyl: The Complete First Season' for Blu-ray on June 7.

Richie Finestra (Bobby Cannavale, two-time Emmy® winner, Boardwalk Empire), the founder and president of American Century Records, is trying to save his company and soul without destroying everyone in his path. With his passion for music and discovering talent gone by the wayside, and American Century on the precipice of being sold, he has a life-altering event that reignites his love of music, but severely damages his personal life. The drama features an amazing all-star cast including SAG Award nominee Olivia Wilde (Doll and Em), and multiple Emmy® winner Ray Romano (Everybody Loves Raymond). Scorsese, Jagger and Winter executive produce along with Victoria Pearman, Rick Yorn, Emma Tillinger Koskoff, John Melfi, Allen Coulter and George Mastras. Executive music producer, Mick Jagger. Winter serves as showrunner.

Specs have not been revealed yet, but supplements will include: 'Making Vinyl: Recreating the 70s' featurette; Inside the Episode briefs; and Audio commentaries by Terence Winter, Bobby Cannavale, and Olivia Wilde.

You can find the latest specs for 'Vinyl: The Complete First Season' linked from our Blu-ray Release Schedule, where it's indexed under June 7. 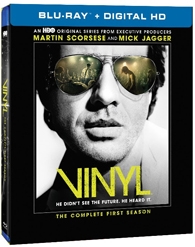 Discs mentioned in this article: (Click for specs and reviews)
Vinyl: The Complete First Season (Blu-ray)