The fourth season of HBO's political satire series will make its way to Blu-ray in April.

In an early announcement to retailers, HBO says 'Veep: The Complete Fourth Season' on Blu-ray on April 19.

Hilariously skewering the whirlwind day-to-day existence of the Vice President's office and Washington politics at-large, the series continues to prove that in Washington, even the most banal decisions can have ripple effects, with unexpected and far-reaching consequences.

Having become president after her predecessor stepped down, it remains to be seen whether her term will outlast that of America's shortest-serving president, William Henry Harrison. With the stakes for Selina (Julia Louis-Dreyfus) and her team higher than ever before, she must still run for election, and over the course of the season's 10 episodes they will grapple with how to make her seem "presidential." The series, created by Oscar nominee Armando Iannucci, features an ensemble cast including Emmy nominee Anna Chlumsky, Emmy winner Tony Hale, Reid Scott, Matt Walsh, Timothy C. Simons, Sufe Bradshaw, Kevin Dunn, Gary Cole and new series regular Sam Richardson. Recurring guests this season include Hugh Laurie Patton Oswalt and Sarah Sutherland.

The Blu-ray will feature 1080p video, lossless 5.1 audio, and supplements include deleted scenes.

You can find the latest specs for 'Veep: The Complete Fourth Season' linked from our Blu-ray Release Schedule, where it is indexed under April 19. 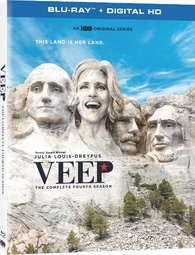