The fifth season of HBO's political satire series is headed to Blu-ray in April.

In an early announcement to retailers, HBO says 'Veep: The Complete Fifth Season' will hit Blu-ray on April 11.

Season 5 of the acclaimed comedy series created by Armando Iannucci finds Selina Meyer in the midst of a virtually unprecedented Electoral College tie – with her future as President coming down to only a few hundred votes. Selina finds herself spinning her wheels in D.C. as her staff continues their mission to make her seem presidential (even though she is the President) while fending off the ambitions of her charismatic Vice Presidential running mate who, through an obscure constitutional procedure, could end up being President. Veep continues to prove that in Washington, even the most banal decisions can have ripple effects – with unexpected and often hilarious consequences.

You can find the latest specs for 'Veep: The Complete Fifth Season' linked from our Blu-ray Release Schedule, where it is indexed under April 11. 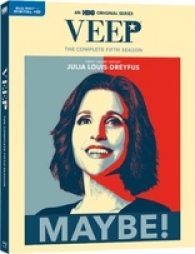