The fifth and final season is already up for Blu-ray pre-orders at Amazon.

In an early announcement to retailers, HBO will be releasing 'Boardwalk Empire: The Complete Fifth Season' on Blu-ray on January 13.

Over the course of its first four seasons, Boardwalk Empire, the hit HBO series from Emmy Award winner Terence Winter and Academy Award-winning director Martin Scorsese, garnered critical accolades for its top-rate performances, beautiful costumes and set pieces and breathtaking cinematography. Concluding a powerful and groundbreaking run, Season 5 jumps forward six full years to 1931. In stark contrast with the Roaring '20s, the country is in the throes of the Great Depression, and with the end of Prohibition in sight, Nucky is looking to legitimize himself by forging alliances with liquor producers.

The Blu-ray will feature 1080p video, a lossless 5.1 soundtrack, and supplements include: Four Cast and Crew Audio Commentaries; Eight "Scouting the Boardwalk" Location Pieces that take fans behind-the-scenes of the final season; and Digital HD Digital Copy of the Entire Season.

You can find the latest specs for 'Boardwalk Empire: The Complete Fifth Season' linked from our Blu-ray Release Schedule, where it is indexed under January 13. 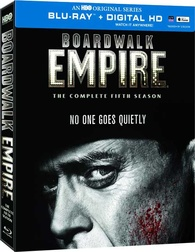