The first season of the HBO comedy is now up for pre-order.

In an early announcement to retailers, HBO is preparing 'Togetherness: The Complete First Season' for Blu-ray on February 16.

The television debut of Jay and Mark Duplass, Togetherness follows two couples living under one roof on the fringes of Los Angeles. Brett and Michelle (Mark Duplass and Melanie Lynskey) are struggling to rekindle the spark in their relationship, which has puttered out from the stresses of marriage and children. When Brett's friend Alex (Steve Zissis) and Michelle's sister Tina (Amanda Peet) m ove in with them, the foursome engage in a tragically comedic struggle to follow their personal dreams while still remaining good fr iends, siblings, and spouses to each other.

Specs have not been detailed, but supplements will include: Deleted scenes; Behind-the-scenes interview with cast members Amanda Peet and Steve Zissis; And More.

You can find the latest specs for 'Togetherness: The Complete First Season' linked from our Blu-ray Release Schedule, where it's indexed under February 16. 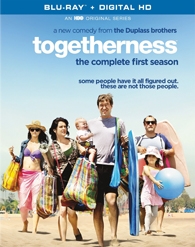 Discs mentioned in this article: (Click for specs and reviews)
Togetherness: The Complete First Season (Blu-ray)