The fourth season of the Cinemax action series will hit Blu-ray in March.

In an early announcement to retailers, HBO is preparing 'Strike Back: Cinemax Season 4' for Blu-ray on March 1.

It's the fourth and final season of the explosive action series Strike Back! Unlikely S20 partners Michael Stonebridge (Philip Winchester) and Damian Scott (Sullivan Stapleton) face their biggest assignment yet: a global threat involving a ruthless network of international terrorists. Throughout the final 10 episodes, Scott & Stonebridge and their S20 colleagues Philip Locke (Robson Green), Julia Richmond (Michelle Lukes) and Kim Martinez (Milauna Jackson) try to crack a missing-persons case in Bangkok. But what's on the surface is only the first step in a massive terrorist plot.

You can find the latest specs for 'Strike Back: Cinemax Season 4' linked from our Blu-ray Release Schedule, where it's indexed under March 1. 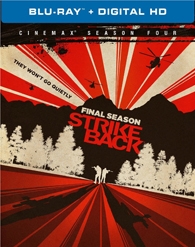 Discs mentioned in this article: (Click for specs and reviews)
Strike Back: Cinemax Season 4 (Blu-ray)