The third season of the Cinemax action series will hit Blu-ray in June. You can pre-order the show here.

In an early announcement to retailers, HBO is preparing 'Strike Back: Cinemax Season 3' for Blu-ray on June 30.

Cinemax's first scripted primetime drama series returns. A high-octane, globe-spanning thriller, Strike Back focuses on two members of Section 20, a secret British anti-terrorist organization: Michael Stonebridge (Philip Winchester), a consummate British soldier still struggling to overcome tragedy in his life, and Damien Scott (Sullivan Stapleton), a disgraced U.S. Delta Force operative who has found redemption with S-20. In Season 3, the series will have a true global canvas, opening in Colombia - with parallel missions in Beirut, Budapest, Russia, and Germany - and following a trail of drug money that is funding terrorists in the Middle East.

You can find the latest specs for 'Strike Back: Cinemax Season 3' linked from our Blu-ray Release Schedule, where it's indexed under June 30. 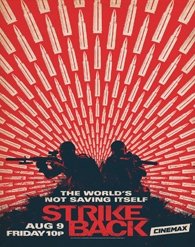 Discs mentioned in this article: (Click for specs and reviews)
Strike Back: Cinemax Season 3 (Blu-ray)