Full details are in for the second season of the Cinemax drama scrubbing in for Blu-ray in August.

As previously reported, HBO is preparing 'The Knick: The Complete Second Season' for Blu-ray on August 2.

From executive producer Steven Soderbergh (who directed all ten episodes), and starring Clive Owen (in a Golden Globe-nominated performance) as brilliant surgeon John Thackery, the series pushes the boundaries of medicine, morality and race relations in 1900 at a downtown NYC hospital known as The Knick. The series has been hailed as "the most effectively, but modestly, stylish show on television" (Vanity Fair) and having "…what tamer period dramas lack: a spark of life and sense of danger" (Variety).

In the second season, The Knick faces an upheaval, as Dr. John Thackery's absence (due to his hospitalization for cocaine addiction), a dearth of affluent patients, and financial missteps have led to the board's decision to shutter the hospital in favor of a new building uptown. In this world of corruption, invention and progress, everyone is searching for the new path that will help him or her survive. Whether it's a path toward justice, freedom, love or just plain survival, nothing comes easy. As relocation plans proceed, the gifted but under-appreciated Dr. Algernon Edwards jockeys to become Thackery's successor as chief of surgery, while fellow doctors, nurses, nuns and administrators grapple with challenges at work and in their private lives.

The Blu-ray will feature 1080p video, a DTS-HD MA 5.1 soundtrack, and supplements include: "The Knick Under Construction" – go on an exclusive walking tour of the most notable sets from The Knick with the man who envisioned them, Production Designer Howard Cummings. See the amazing detail that went into the creation of the Surgical Theater, Men's Ward, and the brand new Mt Sinai Operating theater; "Inside the Costume Shop" – costume designer Ellen Mirojnick is joined by actors André Holland (Dr. Algernon Edwards) and Juliet Rylance (Cornelia Robertson) backstage in her costume shop for fun, revealing conversations about how she went about creating their looks for the series; "Invitation to the Ball" – an extensive look at how director Steven Soderbergh and show creators Jack Amiel & Michael Begler went about creating the extravagant charity ball featured in Episode 7, from Steven's amazing long single tracking shot through the ball to the research that went into creating these memorable scenes in the series; "Inside the Body Shop" – four in-depth looks at the show's medical procedures including the eye-opening ocular surgical sequence, a bloody leg abscess, a brain surgery and a guts-and-all analysis of a heroin addicts autopsy; "Behind the Scenes" – five vignettes with cast and crew discussing the season's plotlines including eugenics, feminism, addiction, race relations and corruption; "Post-Ops" – ten inside the episode recaps; "Knicktoids" – get the real scoop behind many of the fascinating details seen in Season 2; and Audio Commentaries – three commentaries with cast and crew.

You can find the latest specs for 'The Knick: The Complete Second Season' linked from our Blu-ray Release Schedule, where it's indexed under August 2. 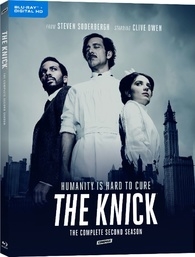