The second season of the HBO comedy series arrives on Blu-ray in April.

In an early announcement to retailers, HBO will be releasing 'Silicon Valley: The Complete Second Season' on Blu-ray on April 19.

After taking the tech world by storm last season at TechCrunch Disrupt, Richard and rest of the Pied Piper team – Erlich, Jared, Dinesh and Gilfoyle – look ahead to a bright and profitable future. But their success may be in jeopardy, thanks to big changes at Raviga, the company created by Peter Gregory, and Nucleus, the competing compression platform launched by Hooli CEO Gavin Belson.

You can find the latest specs for 'Silicon Valley: The Complete Second Season' linked from our Blu-ray Release Schedule, where it is indexed under April 19. 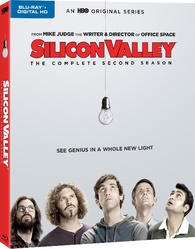