The first season of the critically-acclaimed HBO crime drama is headed for Blu-ray in February.

In an early announcement to retailers, HBO is working on 'Quarry: The Complete First Season' for Blu-ray on February 14.

Set in and around Memphis during the early 1970s, Quarry is a thrilling action drama that centers on the character of Mac Conway, a Marine who returns home from a second tour of duty in Vietnam. With his relationship with his wife Joni growing tenuous, Mac finds himself tempted by a lucrative offer from The Broker, a shady criminal involved in a network of killing and corruption that spans the length of the Mississippi River. After a series of events, Mac – whom The Broker codenames "Quarry" – finds himself conscripted against his better judgment into The Broker's crew, a turn of events that has dire consequences for both himself and Joni. Gripping and "startlingly good" (Yahoo! TV), with action packed storytelling, the first season of Quarry promises to not disappoint.

The Blu-ray will feature 1080p video, lossless audio, and supplements include: Deleted Scenes – A fascinating selection of more than two dozen deleted scenes from Season 1; "Inside Quarry" – Get an inside look at each episode of Quarry with the cast and crew of the acclaimed series; "Quan Thang Inquiry Scenes" – Check out declassified interview footage in which Mac (Logan Marshall-Green) and other soldiers testify to the events of the Quan Thang tragedy; "About Quarry" – Delve inside the setting, characters and storylines of Quarry with the cast and crew; "Music of Memphis" – Join the cast and crew for an inside look at the classic R&B soundtrack and live music seen in the show; "Recreating 1972" – The cast and crew of Quarry reveal how they turned back the clock to recreate the sets and styles of Memphis in 1972; "Love Letters" – Hear the recorded correspondence between Mac and Joni while he served in Vietnam; "Car Chase Picture in Picture" – Join Quarry star Logan Marshall-Green for this action-packed look at the staging of a rough-and-tumble car chase from the series; and Music Videos – Watch a collection of music videos featuring some of the blistering tracks from the series'.

You can find the latest specs for 'Quarry: The Complete First Season' linked from our Blu-ray Release Schedule, where it is indexed under February 14. 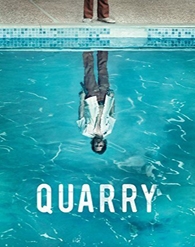