The HBO drama will arrive on Blu-ray in September, and you can pre-order the disc here.

In an early announcement to retailers, HBO is preparing 'Nightingale' for Blu-ray on September 15.

Directed by Elliott Lester from a screenplay by Frederick Mensch, 'Nightingale' is a provocative drama that probes the darkest corners of a disturbed mind, as a war veteran begins to unravel thread by thread. This searing story of solitude and isolation offers a poignant look at how life has failed one man.

You can find the latest specs for 'Nightingale' linked from our Blu-ray Release Schedule, where it's indexed under September 15. 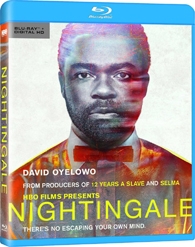 Discs mentioned in this article: (Click for specs and reviews)
Nightingale (Blu-ray)