'Looking: The Complete Second Season' Heading to Blu-ray In July

The second season of the HBO series will arrive on Blu-ray in July, and you can pre-order the show here.

In an early announcement to retailers, HBO is preparing 'Looking: The Complete Second Season' for Blu-ray on July 21.

The unfiltered experiences of three gay friends living and loving in modern-day San Francisco continue in Season 2 of this HBO original series. This year, Patrick (Jonathan Groff) finds himself getting what he thinks he wants--both professionally and romantically--only to realize it's not what he needs; Agustin (Frankie J. Alvarez) leaves his art aspirations behind while striking up a friendship with a charming "bear" in the wake of his rough break-up from Season 1; and Dom (Murray Bartlett) faces many ups and down as he continues pursuing his dream of opening a Portuguese peri peri chicken establishment.

You can find the latest specs for 'Looking: The Complete Second Season' linked from our Blu-ray Release Schedule, where it's indexed under July 21. 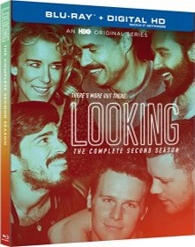 Discs mentioned in this article: (Click for specs and reviews)
Looking: The Complete Second Season (Blu-ray)