'Looking: The Complete First Season' Checking Blu-ray Out In January

The first season of the new HBO series is coming to Blu-ray in January, and pre-orders are now live.

In an early announcement to retailers, HBO is preparing 'Looking: The Complete First Season' for Blu-ray on January 6.

This new HBO comedy series revolves around three thirty-something friends living in San Francisco, who explore the exciting, sometimes overwhelming, options available to a new generation of gay men. Looking offers up the unfiltered experiences of three close friends living - and loving - in modern-day San Francisco. Friendship may bind them, but each is at a markedly different point in his journey: Patrick (Jonathan Groff - Spring Awakening) is the 29-year-old video game designer getting back into the dating world in the wake of his ex's engagement; aspiring artist Agustín (Frankie J. Alvarez - Smash), 31, is questioning the idea of monogamy amid a move to domesticate with his boyfriend; and the group's oldest member, longtime waiter Dom (Murray Bartlett), 39, is facing middle age with romantic and professional dreams still unfulfilled.

The trio's stories intertwine and unspool dramatically as they search for happiness and intimacy in an age of unparalleled choices - and rights - for gay men. Also important to the Looking mix is the progressive, unpredictable, sexually open culture of the Bay Area, with real San Francisco locations serving as a backdrop for the group's lives. Rounding out the Looking world are Dom's roommate Doris (Lauren Weedman), Agustín's boyfriend Frank (O.T. Fagbenle), and Patrick's co-worker Owen (Andrew Law), as well as love interests Kevin (Russell Tovey), Lynn (Scott Bakula), and Richie (Raúl Castillo).

The Blu-ray will feature 1080p video, a DTS-HD MA 5.1 soundtrack, and supplements will include: 6 Audio Commentaries with Groff, Alvarez, creator/executive producer Michael Lannan and executive producer Andrew Haigh; and more!

Suggested list price for the Blu-ray/Digital HD combo pack is $39.98.

You can find the latest specs for 'Looking: The Complete First Season' linked from our Blu-ray Release Schedule, where it's indexed under January 6. 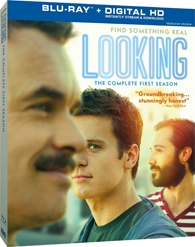 Discs mentioned in this article: (Click for specs and reviews)
Looking: The Complete First Season (Blu-ray)