HBO's 'Veep: The Complete Third Season' Blu-ray Up for Pre-Order!

The third season of the hit HBO comedy will step back into office on Blu-ray in March, and you can pre-order the show here.

In an early announcement to retailers, HBO is preparing 'Veep: The Complete Third Season' for Blu-ray on March 31.

'Veep' follows the whirlwind day-to-day existence of Vice President Selina Meyer (Julia Louis-Dreyfus) as she puts out political fires in her public and private life while launching her campaign for president after learning that the commander-in-chief will not seek reelection. The release features all 10 episodes from the third season of the hit HBO series, along with hilarious, never-before-seen deleted scenes, among other to-be-announced extras. In season three of 'Veep,' Selina and her staff head off to meet America in Detroit and Silicon Valley, go on a drug bust with the Maryland Coast Guard, and fly to London to confer with heads of state. Meanwhile, as Dan and Amy battle for the role of campaign manager, everyone helps Selina define who she is and where she stands on fracking, education, reproductive rights and her hairstyle. With all of America now watching her and her team, even the most banal action can set off a ripple effect that has unexpected and far-reaching consequences.

The Blu-ray/Digital HD combo pack will feature 1080p video, a DTS-HD MA 5.1 soundtrack, and supplements will include: Audio Commentaries with the Entire Cast and Deleted Scenes.

You can find the latest specs for 'Veep: The Complete Third Season' linked from our Blu-ray Release Schedule, where it's indexed under March 31. 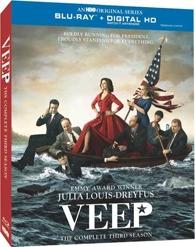