The fourth season of the HBO series will arrive on Blu-ray in February, and you can pre-order the show here.

In an early announcement to retailers, HBO is preparing 'Girls: The Complete Fourth Season' for Blu-ray on February 16.

Lena Dunham returns for the fourth season of Girls, the Emmy®- and Golden Globe-winning comedy series that follows the misadventures of a group of 20-something friends in and out of NYC. This season finds the girls tentatively edging towards maturity as they take on new personas in new worlds. As the season begins, Hannah (Dunham) leaves New York to attend the prestigious Iowa Writers' Workshop in the hopes of becoming a more serious writer, while confronting uncertainty in her relationship with Adam (Adam Driver). Meanwhile, back in New York, Marnie (Allison Williams) pursues a music career while balancing her professional and romantic relationship with Desi (Ebon Moss-Bachrach); Shoshanna (Zosia Mamet) graduates and begins interviewing for jobs, while sorting out her relationship with Ray (Alex Karpovsky); and Jessa (Jemima Kirke) is trying out sobriety through AA, though her ability to stir up drama remains undiminished.

You can find the latest specs for 'Girls: The Complete Fourth Season' linked from our Blu-ray Release Schedule, where it's indexed under February 16. 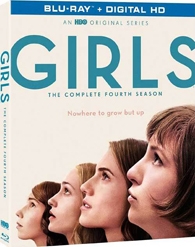 Discs mentioned in this article: (Click for specs and reviews)
Girls: The Complete Fourth Season (Blu-ray)