The first season of the comedy series starring Dwayne "The Rock" Johnson is planned for Blu-ray this summer.

In an early announcement to retailers, HBO will be releasing 'Ballers: The Complete First Season' on Blu-ray on June 14.

Spencer Strasmore (Johnson) is a retired football superstar who is trying to reinvent himself as a financial manager for current players in sun-soaked Miami. His inner circle includes Ricky (John David Washington, former pro-football player), a talented but volatile wide receiver who seeks to balance his off-field antics with his passion for the game; Charles (Omar Miller), a reluctantly retired lineman who's finding it hard to adjust to civilian life; and Vernon (Donovan Carter), a player with a rookie contract, whose promise never to forget "where he came from" brings scores of hangers-on into his life, and lands him in big financial trouble. Though they're pros when it comes to playing the game, each one has a harder time navigating life off the field.

Specs haven't been revealed yet, but supplements will include: Behind-the-scenes looks for each episode.

You can find the latest specs for 'Ballers: The Complete First Season' linked from our Blu-ray Release Schedule, where it is indexed under June 14. 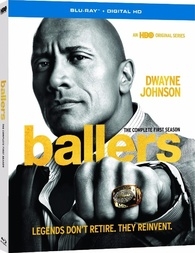