The miniseries starring Frances McDormand is set for Blu-ray in 2015. You can pre-order the show here.

In an early announcement to retailers, HBO is preparing 'Olive Kitteridge' for Blu-ray on February 10.

A look at a seemingly placid New England town that is actually wrought with illicit affairs, crime and tragedy, all told through the lens of Olive, whose wicked wit and harsh demeanor mask a warm but troubled heart and staunch moral center. The story spans 25 years and focuses on Olive's relationships with her husband, Henry, the good-hearted and kindly town pharmacist; their son, Christopher, who resents his mother's approach to parenting; and other members of their community.

You can find the latest specs for 'Olive Kitteridge' linked from our Blu-ray Release Schedule, where it's indexed under February 10. 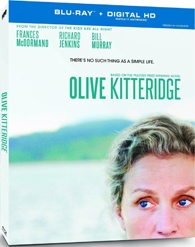 Discs mentioned in this article: (Click for specs and reviews)
Olive Kitteridge (Blu-ray)