Get Ready for 'Banshee: The Complete Third Season' on Blu-ray in April

The third season of the Cinemax action-drama is planned for Blu-ray in April.

In an early announcement to retailers, HBO is preparing 'Banshee: The Complete Third Season' for Blu-ray on April 5.

Season 3 picks up a month after the Season 2 finale, when Carrie's father, gang kingpin Rabbit (Ben Cross), finally met his demise after a climactic church shootout. Carrie, now exposed and estranged from her husband and kids, remains in Banshee, working as a waitress by day while moonlighting with Lucas, Sugar Bates (Frankie Faison) and Job (Hoon Lee) on a variety of local heists. As Lucas finds it harder and harder to keep his true identity from his deputies – especially Siobhan Kelly (Trieste Kelly Dunn), now his romantic interest – he and the Banshee police force become embroiled in a new conflict between Amish gangster Kai Proctor (Ulrich Thomsen) and Chayton Littlestone (Geno Segers), the vicious, vengeance-minded leader of the Redbone wing of the Kinaho tribe. And as fists and bullets fly in and around Banshee, Lucas concocts a new scheme that could net his thieves a fortune – by robbing a decommissioned Marine compound housing millions of dollars.

The Blu-ray set will feature 1080p video, lossless 5.1 audio, and supplements include: Making of the Episode 2 Title Sequence: View the different layers that went into the making of the second episode’s unique title sequence; Banshee Origins: Find out the story before the story with eight prequel videos featuring the cast of Banshee; Banshee Origins Saga: Explore the lives of Lucas, Carrie, Job and more before they made their way to Banshee in this two-part feature; Burton vs Nola Camera Movement: Learn how this epic fight scene was filmed; Burton vs Nola Stunts: Get a behind the scenes look at how the Banshee action comes together; Genoa Rehearsal: Watch as the gang runs through this season’s final showdown; Zoomed In, Episodes 1-8 & 10: Go on the set with the cast to see how key, adrenaline filled scenes were created; Deleted Scenes; Sins Promo; Episode Recaps; Audio Commentaries with Cast & Crew; and a Blu-ray exclusive The Heist: Get a unique perspective on “The Heist” from episode 7 in this multi-camera, interactive feature.

You can find the latest specs for 'Banshee: The Complete Third Season' linked from our Blu-ray Release Schedule, where it is indexed under April 5. 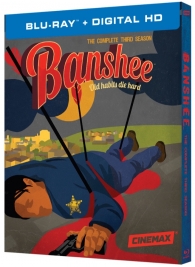