Nominated for 23 Emmy Awards® the sixth season of the hit HBO the series arrives on Blu-ray in November.

HBO will be releasing 'Game of Thrones: The Complete Sixth Season' on Blu-ray on November 15.

The most-watched series in HBO history and a worldwide TV phenomenon, Game of Thrones returns with another power season. This year, after the shocking developments at the end of Season 5 – including Jon Snow's bloody fate at the hands of Castle Black mutineers, Daenerys' near-demise at the fighting pits of Meereen, and Cersei's public humiliation in the streets of King's Landing – survivors from all parts of Westeros and Essos regroup to press forward, inexorably, towards their uncertain individual fates. Familiar faces will forge new alliances to bolster their strategic chances at survival, while new characters will emerge to challenge the balance of power in the east, west, north and south.

Specs have yet to be revealed, but supplements will include: The Battle of the Bastards: An In-Depth Look – Behind-the-scenes piece examining the production challenges of creating this epic event, including explorations of VFX, stunts, and interviews with key cast and crew; Recreating the Dothraki World – Behind-the-scenes piece looking at the creation of Vaes Dothrak and its importance to Dany's evolution; 18 Hours at the Paint Hall –Follow all three shooting units as they converge in this behind-the-scenes snapshot of a day in the life of the largest show on television; Audio Commentaries – The most commentaries ever recorded for Game of Thrones; and Four Deleted Scenes.

Blu-ray exclusives include: In-Episode Guide – Dig deeper into the show with this in-feature resource that provides background information about on-screen characters, locations, and relevant histories; and Histories and Lore – Learn about the mythology of Westeros and Essos as told from the varying perspectives of the characters themselves in 18 history pieces.

You can find the latest specs for 'Game of Thrones: The Complete Sixth Season' linked from our Blu-ray Release Schedule, where it is indexed under November 15. 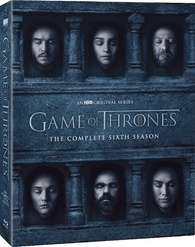