The first season of the HBO series is coming to Blu-ray in May.

In an early announcement to retailers, HBO is preparing 'Divorce: The Complete First Season' for Blu-ray on May 9.

'Divorce' is a dark comedy that follows a suburban couple as they navigate a tumultuous and painful end to their marriage after years of growing apart. Wife and mother Frances decides to end the union after her husband Robert has an 'emotional affair' with another woman. The show breaks down the pristine facade of the nice house and upper middle income lifestyle to show what happens when the walls crumble and the fairy tale falls apart.

Specs have not been detailed yet, but supplements will include exclusive audio commentaries including a bonus feature with actress and executive producer Sarah Jessica Parker, executive producer/writer Paul Simms, and more.

You can find the latest specs for 'Divorce: The Complete First Season' linked from our Blu-ray Release Schedule, where it's indexed under May 9. 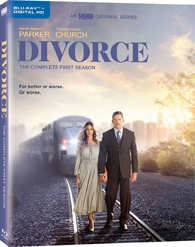 Discs mentioned in this article: (Click for specs and reviews)
Divorce: The Complete First Season (Blu-ray)