The acclaimed miniseries starring Oscar Isaac and Catherine Keener is planned for Blu-ray in February.

In an early announcement to retailers, HBO will be releasing 'Show Me a Hero' on Blu-ray on February 2.

Emmy® winner David Simon is responsible for some of the best, must-see programming in HBO history (The Wire, Treme) and his latest creation, the six-part miniseries Show Me a Hero, is yet another example of “essential viewing” (Los Angeles Times). The miniseries is a story of home, race and community that follows the young mayor of Yonkers, NY (Oscar Isaacs) who must usher the city through a highly contentious government mandate to build affordable housing in its white neighborhoods.

In an America generations removed from the greatest civil rights struggles of the 1960s, the young mayor of a mid-sized American city is faced with a federal court order that says he must build a small number of low-income housing units in the white neighborhoods of his town. His attempt to do so tears the entire city apart, paralyzes the municipal government and, ultimately, destroys the mayor and his political future. From creator David Simon (HBO's Treme and The Wire) and director Paul Haggis (Crash), and based on the nonfiction book of the same name by Lisa Belkin, the six-part HBO Miniseries presentation Show Me a Hero explores notions of home, race and community through the lives of elected officials, bureaucrats, activists and ordinary citizens in Yonkers, NY.

The 2-disc set and will feature 1080p video, lossless 5.1 audio, and supplements include a behind the scenes featurette.

You can find the latest specs for 'Show Me a Hero' linked from our Blu-ray Release Schedule, where it is indexed under February 2. 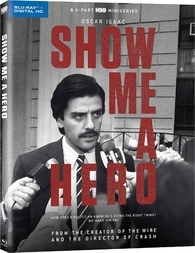