The first two seasons of the acclaimed series with Dolby Atmos audio and Steelbook packaging are almost here and now HBO has released a video spotlighting the new sound design.

As previously reported, HBO is busily working on new Blu-ray editions for each season of the acclaimed fantasy drama.

The releases will not include any new supplements, but the audio will be upgraded to Dolby Atmos and the packaging will be given the Steelbook treatment with exclusive magnets designed by the same team that created the iconic opening credits sequence.

Season 1 packaging features Winterfell, where fans are introduced to the Stark family in the series premiere. The magnet for Season 1 is the direwolf sigil of House Stark.

In Season 2, the Lannisters’ influence is keenly felt from the Iron Throne and their sigil is included on packaging set in King’s Landing, where the season’s pivotal Battle of the Blackwater occurs.

Season 3 features the magnet sigil of House Frey and their ancestral seat of the Twins-the location of this season’s infamous Red Wedding.

Season 4 features the icy landscape of Castle Black and the Wall, where the brothers of the Night’s Watch fend off an army of wildlings from the far north. The magnet for this season features a crow and Jon Snow’s sword, Longclaw.

You can find the latest specs for seasons 1 & 2 linked from our Blu-ray Release Schedule, where they are indexed under November 3. Seasons 3 & 4 have not been dated yet. 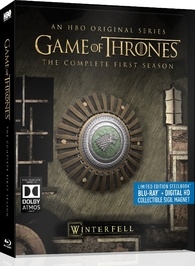 Order the Season One Blu-ray 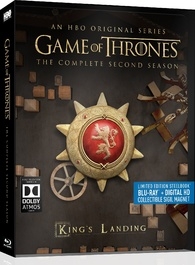