The third season of the hit series starring Emmy winner Jeff Daniels will get the scoop on Blu-ray this summer.

In an early announcement to retailers, HBO is working on 'The Newsroom: The Complete Third Season' for Blu-ray on June 16.

The Newsroom follows a popular cable news anchor, Will McAvoy (Daniels), and his staff in their fervent attempt to report the news honestly and fairly amidst corporate mandates and complicated personal relationships. The third season finds Will, Mac (Mortimer) and the staff of "News Night" facing two explosive situations: the possibility of a hostile takeover of the network, and leaked classified government documents that unleash a legal fire storm threatening to topple more than one professional career.

Going beyond the headlines, the six-part season turns its attention inward, focusing on a series of internal events at ACN that rock the very foundation of the network, and tackles such topics as privacy issues, the influence of social media on traditional news gathering and corporate takeover. The men and women of "News Night" are faced with personal and professional dilemmas that will forever determine their futures. Set against the backdrop of the Boston Marathon bombing, The Newsroom kicks off the season with a highly charged look at the core issue of maintaining journalistic integrity in the era of 24-hour news cycles, while crowd-sourcing and "citizen journalism" result in the dissemination of misinformation.

You can find the latest specs for 'The Newsroom: The Complete Third Season' linked from our Blu-ray Release Schedule, where it is indexed under June 16. 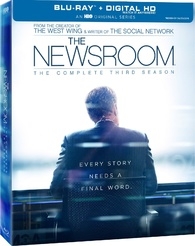