HDD Blu-ray Deal of the Day: 'The Sopranos: The Complete Series' $74.99 at Amazon

Get all six seasons of David Chase's groundbreaking mafia series on Blu-ray for less than $80 today only at Amazon!

Amazon is selling 'The Sopranos: The Complete Series' for $74.99 (73% off the suggested retail price).

Tony Soprano juggles the problems of his fractious family with those of a "Family" of a different sort - the mob. He sees a therapist to deal with his professional and personal problems, which bring on panic attacks. He deals with personal and professional power struggles, affairs, violence, the threat of exposure and betrayal, and a whole bunch of people being whacked. 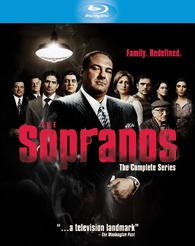