HDD Blu-ray Deal of the Day: 'Boardwalk Empire: The Complete Series' $89.99 at Amazon

Save 63 percent on the critically-acclaimed HBO series today only.

Amazon is selling 'Boardwalk Empire: The Complete Series' for $89.99 (63% off the suggested retail price).

Boardwalk Empire is an Emmy®-winning HBO drama series from Academy Award® nominee/Emmy® Award winner Terence Winter and Academy Award®-winning director Martin Scorsese. The series chronicles the life and times of Enoch "Nucky" Thompson, Atlantic City's czar at a time when Prohibition proved to be a major catalyst in the rise of organized crime in America. 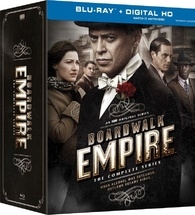