The 1981 cult shocker will cannibalize high-definition in May.

In an early announcement to retailers, Grindhouse Releasing will be releasing 'Cannibal Ferox' on Blu-ray on May 12.

The original uncensored, unrated director's cut of one of the most notorious and violent films of all time. Banned in 31 countries, Cannibal Ferox assaults your senses as a group of Americans lost in the jungles of Amazonia experience brutal retribution at the hands of blood-crazed cannibals. Shot on location in the savage Amazon wilds of South America, Cannibal Ferox is one of the most violent and shocking films ever made. There are at least two dozen scenes of barbaric torture and sadistic cruelty graphically shown. If the presentation of disgusting and repulsive subject matter upsets you, please do not view this film.

You can find the latest specs for 'Cannibal Ferox' linked from our Blu-ray Release Schedule, where it is indexed under May 12. 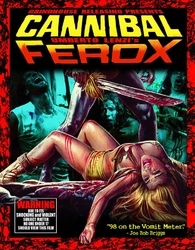