Lucio Fulci's 'The Beyond' Blu-ray Detailed

The cult horror flick will hit Blu-ray in February. You can pre-order the disc here.

In an early announcement to retailers, Grindhouse Releasing is preparing 'The Beyond' for Blu-ray on February 10.

The seven dreaded gateways to hell are concealed in seven cursed places... And on the day the gates of hell are opened, the dead will walk the earth! From legendary Italian horror master Lucio Fulci comes the ultimate classic of supernatural terror. A cursed hotel, built over one of the seven gateways to hell, becomes a malevolent abyss that begins devouring both the bodies and the souls of all who enter in a graphic frenzy of gory crucifixions, brutal chain-whippings, eyeball impalements, sulphuric acid meltdowns, flesh-eating tarantulas, throat-shredding demon dogs and ravenous bloodthirsty zombies. 'The Beyond' is a towering achievement in hair-raising, mind-bending cinematic terror!

You can find the latest specs for 'The Beyond' linked from our Blu-ray Release Schedule, where it's indexed under February 10. 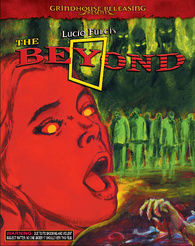 Discs mentioned in this article: (Click for specs and reviews)
The Beyond (Blu-ray)