'I Drink Your Blood' Blu-ray Bound

The 1970 cult horror film will terrorize Blu-ray in November.

In an early announcement to retailers, Grindhouse Releasing is working on 'I Drink Your Blood' for Blu-ray on November 8.

A band of satanist hippies roll into a town and begin terrorizing the local folk. They rape a local girl and her grandpa goes after them. He fails and is given LSD. This bothers his grandson and he gets back at the hippies by feeding them meat pies infected with blood from a rabid dog. They turn into crazed lunatics and begin killing and/or infecting everything in their path.

The first film to be rated X for violence, I DRINK YOUR BLOOD was a huge-grossing hit at drive-ins and "grindhouse" theaters but was severely censored during its original release.

"I DRINK YOUR BLOOD is one of the most infamous movies in the history of exploitation films," says Grindhouse Releasing co-founder Bob Murawski. "Rescuing this lost gem was one of our most important achievements. And being able to finally unite I DRINK YOUR BLOOD with its legendary co-feature I EAT YOUR SKIN, both fully remastered in stunning HD for the very first time, takes that accomplishment one step further. We've spent almost a decade working on this release, and I feel it's our finest yet. I'm also thrilled that so many theaters are playing I DRINK YOUR BLOOD. We've been trying to make this happen for years and have finally succeeded. Seeing this movie on the big screen with an audience is a mind-blowing experience. No self-respecting horror fan should miss this rare opportunity."

Grindhouse Releasing's uncut, restored version of I DRINK YOUR BLOOD recently debuted in New York and Los Angeles and is now playing at theaters and drive-ins across the U.S. and Canada.

The release will feature a spectacular new HD restoration of the original UNCENSORED DIRECTOR'S CUT and the first 3000 copies of the Blu-ray will include the I DRINK YOUR BLOOD HORROR HYPO - Inject your friends with rabies!

You can find the latest specs for 'I Drink Your Blood' linked from our Blu-ray Release Schedule, where it is indexed under November 8. 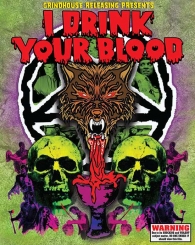