'Cat in the Brain' Bound for Blu-ray in July

In an early announcement to retailers, Grindhouse Releasing is preparing 'Cat in the Brain' for Blu-ray on July 12.

Acclaimed Italian horror maestro Lucio Fulci, director of Zombie and The Beyond, stars in this blood-soaked epic as a director being driven insane by his own movies. Fulci is thrust into an ultra-violent nightmare of death and depravity where murder and madness consume his sanity in a vortex of violence. 'Cat In The Brain' is a psychological masterpiece in the tradition of such cinematic classics as 'Psycho,' 'Strait Jacket,' 'Eraserhead' and Fellini's '8 1/2.'

You can find the latest specs for 'Cat in the Brain' linked from our Blu-ray Release Schedule, where it's indexed under July 12. 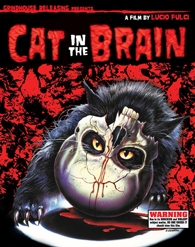 Discs mentioned in this article: (Click for specs and reviews)
Cat in the Brain (Blu-ray)