Google has a revealed its new lineup of Nest products, including the Nest Mini and Nest Wifi. In addition, the company also announced its new Pixel Buds.

The Pixel Buds are wireless ear buds with a low-profile, stabilizer arc, and interchangeable eartip to provide users with a comfortable and secure fit. In addition, the units offer a hybrid design with eartips meant to seal out and isolate loud ambient sounds, along with a spatial vent to still let in a certain amount of outside noise in order to allow users to remain aware of their surroundings. Likewise, the Pixel Buds feature an Adaptive Sound option as well, allowing dynamic volume adjustment to automatically complement quiet or noisy environments. Two microphones are also integrated in each earbud to focus on a user's voice and reduce ambient sound pickup during calls. Finally, Bluetooth connectivity is integrated as well, along with hands-free support for the Google Assistant.

The Google Pixel Buds are set to launch in 2020 for $179 in Clearly White, Oh So Orange, Quite Mint, and Almost Black color options.

Meanwhile, the second generation Nest Mini is a compact smart speaker with integrated Google Assistant capabilities. This new model features an improved speaker with upgraded bass compared to the original Google Home Mini, proprietary audio tuning software, and a dedicated machine learning chip with up to one TeraOPS of processing power for faster response times. In addition, the speaker includes LED lights that activate when a user's hand gets close to the device, revealing where to tap for volume control. Likewise, the Mini has been engineered to hear customer's in noisy environments as well as to adjust playback volume to compensate for a room's ambient sounds.

The Google Nest Mini is now available for pre-order for $49 in Chalk, Charcoal, Coral, Sky color options. Shipments are set to launch in October 22. 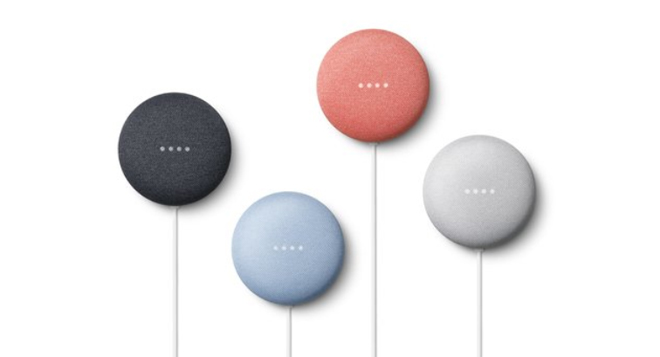 Finally, Google also detailed its new Nest Wifi system as well, which includes a Wifi Router and Wifi Access Point. The router is designed to connect to user's modem and the access point can then be used to extend wireless coverage throughout the home. A two-pack system can offer Wifi coverage for a 3,800-square-foot home and users can add more points to cover even more ground. In addition, the Nest Wifi access point also includes an integrated speaker with Google Assistant support, offering the same functionality as a separate Nest Mini.

The Nest Wifi two pack with a router and access point is now available for pre-order for $269. Shipments are set to launch on November 4.