The 1997 vampire revenge flick will sink its fangs into Blu-ray this summer.

In an early announcement to retailers, Full Moon Features will be bringing 'Vampire Journals' to Blu-ray on July 21.

A 19th century vampire stalks a more powerful vampire lord in his quest to gain revenge over the death of his mistress. In his search for the vampire lord in Eastern Europe he kills many of his servants and fellow vampires while cursing another to vampirism as well...

Specs have yet to be revealed, but supplements will include: Audio commentary by Ted Nicolaou and Charles Band; Full Moons Videozone featurette; and Original Subspecies 1-4 trailers.

You can find the latest specs for 'Vampire Journals' linked from our Blu-ray Release Schedule, where it is indexed under July 21. 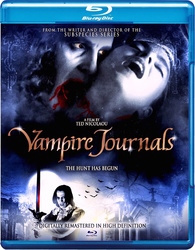