In an early announcement to retailers, Full Moon will be releasing 'Dollman vs. Demonic Toys' on Blu-ray on April 21.

When undercover cop Judith Grey (Tracy Scoggins, reprising her original role) discovers the murderous Demonic Toys have returned to the Toyland warehouse, she has only one thought in mind: destroy the hideous playthings at all costs. But she needs help. So she turns to the only man on Earth who can measure up to these toychest terrors-Brick Bardo aka Dollman (Tim Thomerson). Joined by his girlfriend, the equally diminutive Ginger (reduced to 11 inches in Bad Channels), futurecop Bardo teams with Judith to battle the mutant toys. Now Bardo must fight to save his life and his love as Baby Oopsie develops a large crush on the luscious Ginger...

Specs and supplements haven't been revealed yet, but the suggested list price for the Blu-ray is $24.95.

You can find the latest specs for 'Dollman vs. Demonic Toys' linked from our Blu-ray Release Schedule, where it's indexed under April 21. 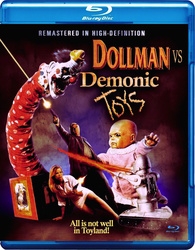