A boxed set of 20 films on Blu-ray will be available in stores in December.

In an early announcement to retailers, 20th Century Fox will be releasing 'Fox Searchlight 20th Anniversary Collection' on Blu-ray on December 9.

Celebrating two decades of cinematic innovation and excellence, Fox Searchlight Pictures 20th Anniversary Collection features powerful performances and direction by some of Hollywood's most beloved actors and filmmakers. Each of the 20 iconic films featured in this one-of-a-kind collection was hand selected from Fox Searchlight's impressive catalog based on considerations of timelessness, cultural impact, awards recognition and box office success. From sidesplitting comedies and riveting thrillers to unforgettable dramas, including Best Picture Academy Award® Winners Slumdog Millionaire (2008) and 12 Years a Slave (2013), these critically acclaimed movies have captured the hearts and imaginations of audiences around the world.

The films in this set include:

Exclusive to the collection is an all-new Blu-ray bonus disc, "WE HAVE YOUR STORY," which features a 98-minute documentary celebrating Fox Searchlight's history through the eyes of the filmmakers, the talent and the films. From its inception, Fox Searchlight has been a haven for the stories of our lives – stories of hope and struggle, of success and failure, of love and loss. Global, resonant, daring, funny, inspirational and heartbreaking, the Fox Searchlight library has been a window to our world, and its promise has been to offer the most visionary directors, actors and writers a setting to express themselves unlike any other. We Have Your Story is a celebration of that pledge, highlighting the special bond that exists between the filmmakers, the stars...and the story.

You can find the latest specs for 'Fox Searchlight 20th Anniversary Collection' linked from our Blu-ray Release Schedule, where it is indexed under December 9. 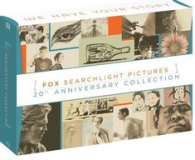