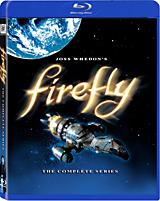 Ending months of anticipation, Fox has confirmed a mid-November landing for 'Firefly,' which will come to Blu-ray as a three-disc set with multiple exclusive features.

After weeks of rumored street dates, Fox today issued the official press release for the complete 'Firefly,' which will hit Blu-ray on November 11 as a three-disc set containing the short-lived series' complete fifteen-episode arc.

Extras include audio commentaries with cast & crew on eight episodes, four featurettes ("Here's How It Was: The Making of "Firefly,'" "Serenity: The 10th Character," " Joss Sings the “Firefly” Theme," "Joss Tours the Set"), deleted scenes, a gag reel and audition tapes.

Exclusive to the Blu-ray is an additional audio commentary by executive producer Joss Whedon and actors Nathan Fillion, Alan Tudyk and Ron Glass (on "Our Mrs. Reynolds"), and the featurette "'Firefly' Reunion: Lunch with Joss, Nathan, Alan and Ron."

Suggested retail price for the Blu-ray has been set at $88.98.

You'll find complete specs for 'Firefly' linked from our Blu-ray Release Schedule, where it's indexed under November 11.

Discs mentioned in this article: (Click for specs and reviews)
Firefly (Blu-ray)