The first season of the hit series is headed for Blu-ray in September.

In an early announcement to retailers, 20th Century Fox will be releasing 'Empire: The Complete First Season' on Blu-ray on September 15.

Set within a world of music, glamour, danger and power, EMPIRE is about a family dynasty that follows the head of a music empire whose three sons and ex-wife all battle for his throne. After music mogul Lucious Lyon (Oscar® Nominee Terrence Howard*) is diagnosed with a potentially fatal disease, he must choose which of his three sons will succeed him at the legendary Empire Entertainment. The game changes when his ex-wife Cookie (Oscar® Nominee Taraji P. Henson**) returns from prison where she’s been for almost two decades. Brash and fearless, she sees herself as the sacrificial lamb who built an empire with Lucious and then took the fall for running the drugs that financed Lucious’ early career. As the Lyons slug it out, a battle begins that will either cause the family’s destruction or redemption.

The Blu-ray™ and DVD of “Empire” Season 1 is packed with even more show-stopping moments and music performances such as “Drip Drop” and “You’re So Beautiful.” Get five complete performances, including the popular hit “No Apologies” on the DVD. Own it on Blu-ray™ and dive into more than nine hours of content and 50 minutes of special features, including 11 complete performances highlighting five of the most-popular songs from the series purchased on iTunes.

You can find the latest specs for 'Empire: The Complete First Season' linked from our Blu-ray Release Schedule, where it is indexed under September 15. 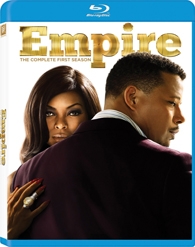