The special widescreen travelogues are journeying toward Blu-ray in November.

In an early announcement to retailers, Flicker Alley is preparing 'Cinerama: Search for Paradise' and 'Cinerama: Seven Wonders of the World' for Blu-ray on November 11.

'Cinerama: Search for Paradise' - Join Lowell Thomas and follow in the footsteps of Marco Polo in this new, digital restoration of 'Search for Paradise,' the fourth of the original, 3-panel Cinerama travelogues. Released in 1957, the motion picture takes you to the "Roof of the World," the Himalayas and Karakoram mountains of Central Asia, the highest region on Earth. You'll become part of the adventure as explorer Lowell Thomas searches for paradise in ancient cities, wild river rapids, and the lush gardens of mountaintops.

Your first stop is the Forbidden Kingdom of Hunza, a hidden valley bordered by China, Russia, India, Pakistan, and Afghanistan, home to a legendary warrior tribe. Next, you'll challenge the rapids of the Mighty Indus River, fed from a fantastic galaxy of monumental glaciers draining from some of the greatest heights known to man. From there, find respite in the romantic Shalimar Gardens in the Vale of Kashmir, then fly to Katmandu for the coronation ceremony of King Mahendra of Nepal. The adventure concludes with a trip to a U.S. Air Force base, where Thunderbird jet planes cut across the sapphire blue sky overhead at supersonic speed.

Flicker Alley and Cinerama, Inc. are proud to present Search for Paradise in the Smilebox Curved Screen Simulation. Unseen theatrically since the early 1970s and never before issued on home video, Search for Paradise has been digitally remastered from original camera negatives. The film captures the imagination and asks what your dream paradise would be: beauty, adventure or peace.

Specs have not been revealed yet, but supplements will include: The original Search for Paradise breakdown reel the same one used in its 1956 theatrical run; Behind-the-scenes video of the Cinerama crew setting up for the Air Force base shoot and on location 16mm footage of the Nepal shoot; The 3-panel 2012 Cinerama short In the Picture, as well as The Last Days of Cinerama, which goes behind-the-scenes of the making of In The Picture; A 1998 interview with director Otto Lang; David Coles Search for Paradise presentation
Demonstration on how the original negatives were restored; A brand new rerelease movie trailer, a 1950s black & white announcement trailer, and image gallery; Plus a facsimile representation of the original program booklet.

Suggested list price for the Blu-ray/DVD combo pack is $49.95. 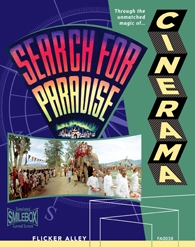 The quest opens at the great pyramids, the last of the original Seven Wonders to still exist. From there, the "Smasher" circles the globe with Cinerama photographing a live East Africa volcano, under the bridges in New York, over and around Rio de Janeiro, the Parthenon in Athens, Angel Falls in South America, and many stops along the way to experience the beautiful culture of diverse locales. The film encourages the audience to choose from the dozens of sites explored. "What are your seven wonders?"

Flicker Alley and Cinerama, Inc. are proud to present 'Seven Wonders of the World' in the Smilebox Curved Screen Simulation. Unseen theatrically since the early 1970s and never before broadcast or issued on home video, Seven Wonders of the World has been digitally remastered from its original camera negatives. The global adventure captures the beauty and culture of these extraordinary places in a Cinerama time capsule.

Specs have not been revealed yet, but supplements will include: The original SEVEN WONDERS OF THE WORLD breakdown reel - the same one used in its 1956 theatrical run; Image Gallery; Newsreel from the opening night in New York; A restoration demonstration on how the damaged negative was fixed; The Best in the Biz Cinerama composers documentary; The French Cinerama Everywhere short on Cinerama tent shows in Europe; A brand new SEVEN WONDERS OF THE WORLD movie trailer; A black & white TV trailer; and A 1960 "abandoned" trailer.

Suggested list price for the Blu-ray/DVD combo pack is $49.95. 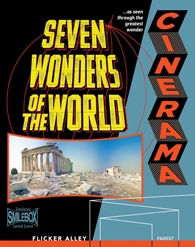 You can find the latest specs for 'Cinerama: Seven Wonders of the World' and 'Cinerama: Search for Paradise' linked from our Blu-ray Release Schedule, where they are indexed under November 11.

Discs mentioned in this article: (Click for specs and reviews)
Cinerama: Search for Paradise (Blu-ray)
Cinerama: Seven Wonders of the World (Blu-ray)