Two more Cinerama titles will arrive on Blu-ray in November.

In an early announcement to retailers, Flicker Alley is preparing 'Cinerama's Russian Adventure' & 'The Best of Cinerama' for Blu-ray on November 22.

'Cinerama's Russian Adventure' - Photographed over an eight-year period by Russia s top filmmakers, Cinerama's Russian Adventure brings together some of the most exquisite, jaw-dropping, and beautiful sequences from over six Soviet Kinopanorama productions (the Russian equivalent of three-panel Cinerama). The film's locations stretch from one end of Russia to the other, from the snow-covered countryside to the majestic subways of Moscow, from the deck of a whaling ship to the front seats of the Bolshoi Theater. Bing Crosby narrates the journey, offering both a grand and intimate view of a country and culture so often cited and yet so seldom seen.

In classic Cinerama style, your first glimpse of Russia is from behind the reigns of a troika, a traditional three-horse sled, speeding through the snow. Next, you ll land in Moscow for spectacular shots of the Kremlin, the Volga River, the bustling street life, and a spring carnival complete with singing, dancing, and clowns on stilts. From there, you ll marvel at the dazzling Moscow Circus, take a raft ride down the Tisza River, join in a wild antelope roundup on the Barsa-Kelmes, and witness a show-stopping performance of the famous Moiseyev Dancers. The most visceral sequences, though, take place not on land, but on water: the spare-no-details whale hunt aboard a factory ship in the Antarctic and the alien voyage of an octopus as it glides beneath the sea.

Flicker Alley, Cinerama Inc., and the family of Hal Dennis / Hal Dennis Productions are proud to present Cinerama's Russian Adventure in the Smilebox® Curved Screen Simulation. The film has been digitally remastered, and beautifully so, allowing audiences to experience - in the words of Bing Crosby what I believe will be our most exciting journey...

Specs have not been detailed yet, but supplements will include: Fortress of Peace (1964): A Swiss Army propaganda film shot in Cinerama and nominated for the 1965 Academy Award® for Best Live Action Short Film; Concorde (1966): A 70mm Cinerama short about the then soon-to-be-unveiled supersonic airplane; Working With Our Father on Russian Adventure: An interview with film editors Craig and Hal Dennis Jr., sons of producer Hal Dennis; Reconstructing Russian Adventure : A restoration demonstration with Dave Strohmaier; Russian Adventure Trailer: Theatrical trailer; Slideshows: Ads and publicity materials, sample scripts pages, and Russian Adventure Study Guide; Program Booklet: A facsimile representation of the original program booklet; and Trailer Gallery: Collection of trailers from other Cinerama shows (Blu-ray only) 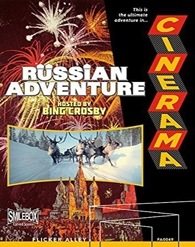 'The Best of Cinerama' - The Best of Cinerama is comprised of all the greatest thrills of Cinerama, from the breathtaking roller coaster ride to the visit to La Scala, Milan, for Aida; from the hurtling bobsled run, to the stirring dances of the African Watusis. Made up of over 20 such exciting highlights, the film is not only an historic compilation, but also a stand-alone thrill-a-minute experience.

The adventure begins with the Sabre jet precision flying team from Search For Paradise, and then whirls back to the iconic roller coaster sequence from This is Cinerama! newly restored for this release. From there, the three-panel journey goes global, showcasing some of the rich and exotic locales of Cinerama Holiday, South Seas Adventure and Seven Wonders of the World. There s the Marian Year Celebration at St. Peter s Square in Rome, featuring the first commercial motion-picture footage of Pope Pius XII. There s the boat trip down the Ganges River at Benares. There are visits to Paris, Vienna, Athens, India, Brazil, Japan, Africa, Israel, and New Orleans, all in one spectacular Cinerama presentation.

Flicker Alley and Cinerama Inc. are proud to present The Best of Cinerama in the Smilebox® Curved Screen Simulation. The film has been digitally remastered from original camera negatives, and includes an all-new restoration of scenes from This is Cinerama! This edition celebrates a decade of Cinerama filmmaking, and over five years of bringing those treasures back to life on Blu-ray and DVD for future Cinerama audiences to enjoy!

Specs have not been detailed yet, but supplements will include: Feature Length Audio Commentary: With Cinerama historian David Coles; Shellarama (1965): Shot in Super-Technirama and released on 70mm, this Shell-produced short follows the journey of Shell oil from raw source to refined fuel; Bridge to Space (1968): A 70mm short documentary shot on Merritt Island and at Cape Canaveral; The Rangerettes : Deleted scene from Seven Wonders of the World featuring Kilgore College Rangerettes; Battleship Iowa Arrives in San Pedro : A Cinerama short film shot in 2012; Reconstructing The Best of Cinerama : A restoration demonstration with Dave Strohmaier; The Best of Cinerama Trailer: Theatrical trailer; Program Booklet: A facsimile representation of the original program booklet; Cinerama Troika : Interview with the principles behind Cinerama travelogue restorations (Blu-ray only); Remembering The Best of Cinerama : Interview with Norman Karlin, Cinerama editor (Blu-ray only); and Slideshows: Who s Who in Cinerama History ; Show Places of the 1950s ; and more! (Blu-ray only). 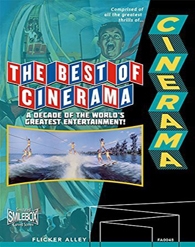 You can find the latest specs for 'Cinerama's Russian Adventure' & 'The Best of Cinerama' linked from our Blu-ray Release Schedule, where they're indexed under November 22.

Discs mentioned in this article: (Click for specs and reviews)
Cinerama's Russian Adventure (Blu-ray)
The Best of Cinerama (Blu-ray)