In an early announcement to retailers, Flicker Alley will be releasing '3-D Rarities' on Blu-ray on June 16.

It has taken over 30 years for the 3-D Film Archive to assemble and restore the material in 3-D Rarities, an eye-popping collection of ultra-rare and long-lost movies, which Flicker Alley and the 3-D Film Archive are proud to present here for the first time on Blu-ray.

Selections include Kelley's Plasticon Pictures, the earliest extant 3-D demonstration film from 1922 with incredible footage of Washington and New York City; Lumière’s L’Arrivée d’un Train, first shown at the Academie des Sciences in Paris; New Dimensions, the first domestic full color 3-D film originally shown at the World’s Fair in 1940; Thrills for You, a promotional film for the Pennsylvania Railroad; Around is Around, a 3-D animated gem by Norman McLaren; Rocky Marciano vs. Jersey Joe Walcott, the only 3-D newsreel; Stardust in Your Eyes, a hilarious standup routine by Slick Slavin; trailer for The Maze, with fantastic production design by William Cameron Menzies; Doom Town, a controversial anti-atomic testing film mysteriously pulled from release; puppet cartoon The Adventures of Sam Space, presented in widescreen; I’ll Sell My Shirt, a burlesque comedy unseen in 3-D for over 60 years; Boo Moon, an excellent example of color stereoscopic animation…and more!

Presented in high-quality digital 3-D, all films have been stunningly restored and mastered direct from archival materials. Meticulously aligned shot by shot for precise registration of the original left/right elements, these historic 3-D motion pictures have never before looked this good.

The date of the first documented exhibition of a 3-D film occurred on June 10, 1915. 3-D Rarities commemorates the centennial of 3-D motion pictures!

You can find the latest specs for '3-D Rarities' linked from our Blu-ray Release Schedule, where it is indexed under June 16. 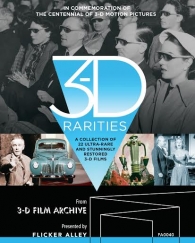