'Terminator 3' Bound For Blu-ray This December

The wait is over: 'Terminator 3,' the first of Warner's long-awaited Blu-ray "catch-up" titles is due for release this December.

Originally released on HD DVD back in September 2006 (read our review), 'Terminator 3: Rise of the Machines' is one of a handful of high-profile Warner titles that were previously held back from Blu-ray release due to the format's then-inability to support the studio's "In-Movie Experience" picture-in-picture commentary feature.

At press time, it was not immediately clear how Warner will be powering the PiP feature for 'T3.' With the BDA-mandated October 31 deadline for Profile 1.1 hardware support fast approaching, some Blu-ray players will soon have full BD-Java support (which is required in order to true secondary video PiP functionality), but earlier Blu-ray discs have included somewhat similar functionality by simply burning a PiP window onto an entirely separate second encode of the film itself.

According to a just-released fact sheet from Warner (see below), the $300 million-grossing action sequel will hit Blu-ray on December 4 with all of its high-def bells and whistles intact. In addition to the aforementioned In-Movie Experience commentary, the 'T3' Blu-ray edition will mirror the earlier HD DVD's extras, including three audio commentaries with the cast and filmmakers, four making-of featurettes, a pair of gag reels, a storyboard comparison and the theatrical trailer. 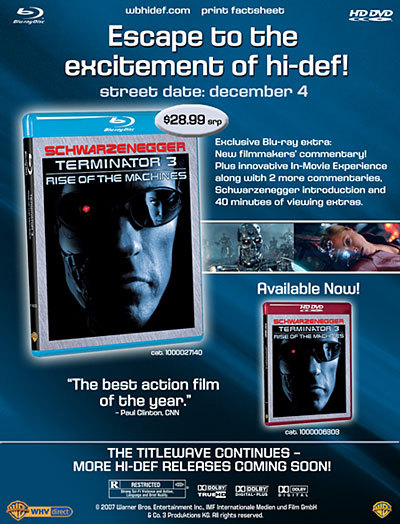 There's no word yet on when we can expect any of the the studio's other Blu-ray catch-up titles, but with currently HD DVD-exclusive Warner hits like 'Batman Begins,' 'The Ultimate Matrix Collection' and 'V For Vendetta' all waiting in the wings, this may just end up being a Christmas to remember for Blu-ray fans.

As always, you'll find the latest disc details for 'Terminator 3' linked from our Blu-ray Release Schedule, where it's indexed under December 4. Stay tuned for complete specs to be revealed soon.