The action flick is high-kicking itself to Blu-ray in June, and you can pre-order the disc here.

In an early announcement to retailers, Entertainment One is preparing 'Pound of Flesh (2015)' for Blu-ray on June 23.

In China to donate his kidney to his dying niece, former black-ops agent Deacon wakes the day before the operation to find he is the latest victim of organ theft. Stitched up and ticked-off, Deacon descends from his opulent hotel in search of his stolen kidney and carves a blood-soaked path through the darkest corners of the city. The clock is ticking for his niece and with each step he loses blood.

You can find the latest specs for 'Pound of Flesh (2015)' linked from our Blu-ray Release Schedule, where it's indexed under June 23. 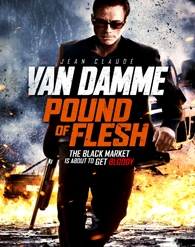 Discs mentioned in this article: (Click for specs and reviews)
Pound of Flesh (2015) (Blu-ray)