The action-adventure starring Nicolas Cage and Hayden Christensen is headed for Blu-ray in March.

In an early announcement to retailers, Entertainment One will be releasing 'Outcast ' on Blu-ray on March 31.

When the heir of the Imperial throne becomes the target of an assassination by his despised older brother, the young prince must flee the kingdom and seek protection. His only hope for survival is a reluctant war-weary crusader named Jacob, who must overcome his own personal demons and rally the assistance of a mythical outlaw known as The White Ghost. Together they must fight side by side in an epic battle to return the prince to his rightful place on the throne.

You can find the latest specs for 'Outcast ' linked from our Blu-ray Release Schedule, where it is indexed under March 31. 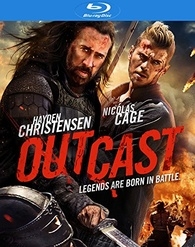