The crime series will hit Blu-ray in October, and you can pre-order the show here.

In an early announcement to retailers, Entertainment One is preparing 'Matador: The Complete Series' for Blu-ray on October 13.

'Matador' stars Tony Bravo, a DEA agent from East LA who is recruited by the CIA to investigate the LA Riot by going undercover as one of their players. Tony will need the espionage skills to impress his handlers and fast footwork on the pitch, or The Beautiful Game could end in sudden death.

You can find the latest specs for 'Matador: The Complete Series' linked from our Blu-ray Release Schedule, where it's indexed under October 13. 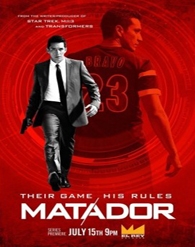 Discs mentioned in this article: (Click for specs and reviews)
Matador: The Complete Series (Blu-ray)