In an early announcement to retailers, Entertainment One is preparing 'Lila & Eve' for Blu-ray on August 25.

Lila, a grieving mother whose son was killed in a drive-by shooting, attends a support group where she meets Eve, who has also lost her daughter to street violence. When the police prove incapable of bringing those responsible to justice, Lila and Eve team up as vigilantes and take matters into their own hands.

You can find the latest specs for 'Lila & Eve' linked from our Blu-ray Release Schedule, where it's indexed under August 25. 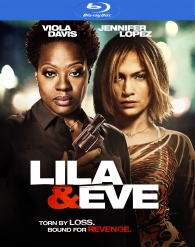 Discs mentioned in this article: (Click for specs and reviews)
Lila & Eve (Blu-ray)