The western starring Kiefer Sutherland, Donald Sutherland, and Demi Moore will ride to Blu-ray at the end of the month.

In an early announcement to retailers, Entertainment One will be releasing 'Forsaken' on Blu-ray on March 29.

In 1872, John Henry Clayton (Kiefer Sutherland) retires as a gunfighter and returns to his hometown of Fowler, Wyoming in hope of repairing his relationship with his estranged father, Reverend Clayton (Donald Sutherland). However, he soon learns that the town is in turmoil, as the railroad will be coming through the area and a criminal gang is terrorizing ranchers who refuse to sell their land. John Henry is the only one who can stop them, but his father does not want his son to return to a life of violence.

Specs and supplements haven't been revealed yet, but the suggested list price for the Blu-ray is $32.98.

You can find the latest specs for 'Forsaken' linked from our Blu-ray Release Schedule, where it is indexed under March 29. 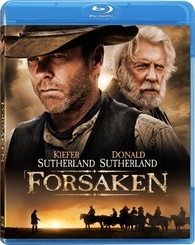